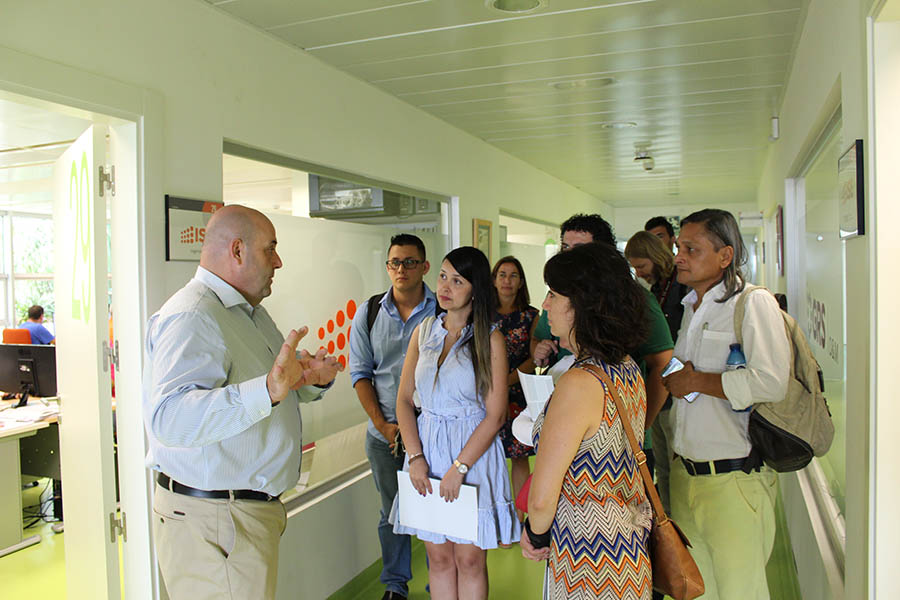 ISE Welcomes a Colombian Delegation at PITA in Almería

As part of a cooperation program between cities on an international level, supported by the European Union and in which the local government of Almería is taking part, a municipal delegation from the city of Armenia (Colombia) visited PITA (Science and Technology Park of Almería) on September 6, Thursday. The representatives of the Colombian city were able to see first-hand the solar and agricultural technology that is being developed in a big cooperation and innovation center such as PITA, which can be so useful for carrying out sustainable initiatives in Armenia.

As expected, one of the highlighs of this visit took place at the ISE headquarters, located in the Pitágoras Building. Francisco Javier Fernández del Pino, manager of our company, welcomed the Colombian attendees and showed them the photovoltaic projects in which we are working. “We believe we can be useful for the Armenia city, which is part of the Colombian coffee growing axis, through battery storage and production of photovoltaic installations”, claimed Fernández del Pino, who voiced his interest in collaborating in future projects that can benefit the development of Armenia.

The Pitágoras Building, in which the ISE headquarters are located, is the heart of PITA

At the same time, Claudia Milena Hincapié, director of Urban Planning at the local government of Armenia, showed her satisfaction for the organization conducted by the local government of Almería, and explained that “we were particularly interested in the use of renewable energy for the treatment of water quality, it is one of the most important aspects for us”.

Armenia is a city of around 300,000 inhabitants, capital of the Quindío Department. It is one of the most important cities of the Colombian coffee growing axis, a geographic, cultural, economic and ecologic region of Colombia that is famous because of its huge coffee production.

Category : America , Spain
Tags: colombia, pita
this site uses its own and third-party cookies to offer you a better browsing experience. You can learn more about what cookies we use and what they are used for, as well as information to deactivate them, by following the link Read More Accept
Privacy & Cookies Policy